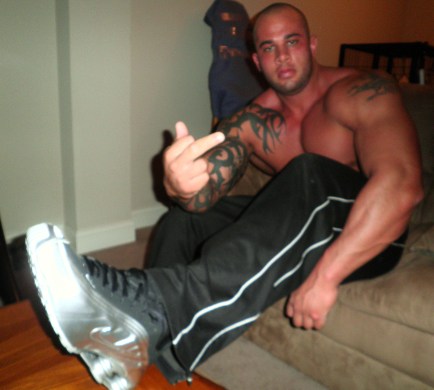 FILL MY SHOX HEELS UP WITH FAG CASH

This pathetic faggot that I’ve cashraped in the past recently came crawling back to me begging to $erve.  It’s an undercover sissy bitch and pretends to be a “man” in real life.  What a complete joke.  The cunt tributed me and watched me on Skype wearing jeans and Nike Shoxs.  I humiliated the faggot and told it how pathetic it was.  I told it that I would squat over its face and turn it into a full use toilet.  I ripped ass on cam several times and told the slave to suck the fart fumes up like a vacuum cleaner.  It told me that it thinks it’s a man until it see and hears me on cam.  It’s pretty easy for me to drain a slaves manhood that it probably never has in the first place.  It told me that it fantasizes about me kicking it in its useless balls with my Nike Shoxs as hard as I can.  I told the fag that if I saw it in real life I would kick it in its balls until they literally pop.  I would lace up my old football cleats from high school and stomp on its balls as hard as I possibly could.  Its faggot balls would look like a pin cushion.  I told the weak submissive faggot that it should be castrated.  It already sounds like a bitch over Skype and I’m sure that its balls are completely useless.  When I told the fag that I would castrate it, it immediately sent me more fag cash.  The faggot told me that its been wearing a chastity on its clit and huge black plug up its cunt.  I told the cunt that it should be wearing pink panties and stockings every day even to work.  I even got the cash fag to admit that it watches gang bang porno and wishes that it was the whore getting fucked by all of the men.  The slave finally told me that it went to meet some other faggot off of Craig’s list for anonymous fag sex last week in a public park at night.  When it got to the park there was three Hispanic guys there that started to beat the shit out of it.  They took turns skull fucking the faggot and even shoved a tree branch up its ass.  The slave was practically crying when it was telling me about the encounter and all I could do was laugh my ass off.  I asked the faggot how the tree branch felt when it got shoved up its cunt.  It said that the tree branch was huge and that the three guys sodomized its cunt.  They were laughing the entire time while the faggot was crying and suffering.  The slave said that it couldn’t even scream for help because its mouth was full with cock the entire time.  When the three Hispanic guys were done they took all of its belongings and ran off.  The faggot was left on a bench in the middle of the night completely naked with a huge tree branch sticking out of its cunt cum all over its face and multiple loads shot down its throat.  The slave told me that it finally pulled the huge tree branch out of its ass and had to walk back to its car completely naked because all of its clothes were stolen.  I was laughing my ass off when this stupid fag was telling me this story.  It told me that a few people even saw it walking back to its car completely naked and were laughing at it.  Some guy was yelling “Stupid faggot” at the slave when it was walking with its head down and tears pouring from its eyes.  What a horrible sad story haha.  I made the fag send me more fag cash for listening to its pathetic story.  I told it that it should be at a glory hole sucking multiple random cocks because it’s a feminized cum drinking slut.  It agreed with me and knew it was a pathetic piece of shit.  I really made this slave realize how pathetic it was and told it that it deserved to get sodomized with a tree branch by the three Hispanic guys.  I told it that it was born to be humiliated and used by straight men.  It’s been living life as an undercover faggot which is a complete joke to me.  I told it that people already know that its a submissive cock sucking faggot bitch.  I cashraped this pig and told it to find a glory hole to suck cock and swallow cum.  This slave was just another weak pathetic loser that needed to be put in its place.  It’s a cash faggot ATM and full use toilet for alpha gods.  I know if I saw this faggot I would toss it on the ground and take a huge steamy piss all over its face.  I love putting inferior cunts in their place and making them realize their purpose in life.