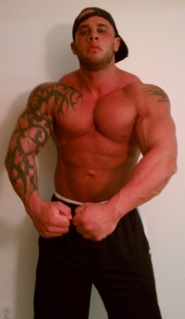 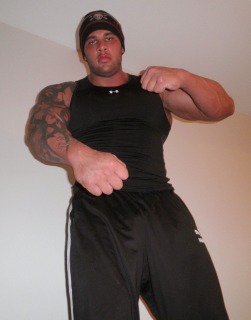 Life is awesome when your a tall jacked Adonis stud.  A pain pig/toilet came down to AC to hand over cash to me in real time to be humiliated and abused.  I went to the gym before I met the cunt to get my muscle pumped.  My arms were still pumped up when I got to the slave’s hotel room.  I opened the door and saw the cunt on all fours with my cash in its mouth.  I laughed at the cunt took the cash and spat a big luggie in its mouth.  I verbally abused and degraded the pigshit while it crawled on all fours like a dog.  It knew better not to stand in my presence.  The faggot cleaned and polished my sneakers with its tongue while I sat and watched TV.  I lit up a cigar and used its mouth as an ashtray.  Its face and mouth were black in ash and covered in spit.  I showed this pain pig no remorse.  I made it strip down naked while I took my belt off.  I laughed my ass off when I saw its supposed penis.  It was the size of a woman’s clit and was basically useless for any sexual purpose.  The only purpose it served was for PAIN.  I yelled at the faggot to keep its legs spread while I sadistically whipped its dick and balls with my belt.  I told the cunt that it deserved every single whip while it whimpered and cried like a girl.  The only words that I heard it mumble were yes sir.  Tears were running down its eyes while I made it SUFFER.  My arm actually got numb from whipping it so much. The pain pigs body was beat red from my leather belt.  I ordered the cunt to open its mouth so I had a toilet to piss in.  The pig then crawled to its suitcase and got out some poppers.  It was time to really fuck this pig shit up.  While the faggot was on its knees with poppers I stood behind it and wrapped my belt around its neck. I told the faggot to sniff while I count down from five.  The fag did as ordered and got choked hard with my belt after the countdown.  The fag was choking and was ordered to sniff again.  Finally I loosened the belt when its face turned purple. It gasped for oxygen and said the room was spinning.  I wrapped my belt around its neck again and ordered it to sniff. I got this fag bitch real tweaked out on poppers. This fag bitch doesn’t even deserve to breathe oxygen.  It should be hooked up to a oxygen mask that just pumps out popper fumes.  I totally owned the pig and turned it into an object for exploitation for two hours straight.  I made sure to take one final piss in its mouth before I left. The pain pig was still dizzy from all the poppers it was forced to sniff.  I left the pigs hotel room with shined up sneakers, an empty bladder, and a pocket full of cash.