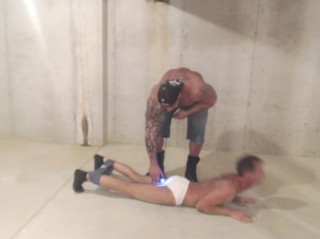 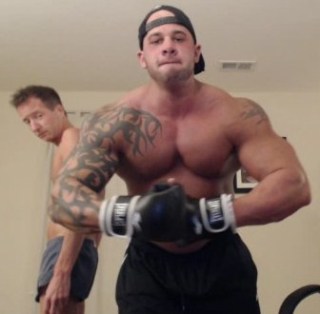 New real time slave domination videos made.  I humiliated and beat this faggot senseless.  Here’s a quick description of each video that I made that’s available.

Faggot handcuffed then tied around a wall beam in my basement face first then ball gagged.  I punched the shit out of its back before ripping its shirt off.  I took a high voltage tazor and tazed it over and over.  Whipped the shit out of it with my belt.

Faggot licks my boots in the basement while i rip its shirt off and pants off leaving it only in underwear.  I whip it first with my belt while trampling the shit out of it.  The fag is covered in dust and dirt from the floor.  I make it bend over and tazor its balls a few times making its hair stand up.  I piss directly in its mouth and all over its body.  The faggot drinks the piss off the dirty ground while I continue to abuse it.  I even made this cunt spread its legs and kicked it in the balls a few times.  I finally took out a heavy duty bull whipped and laughed while I ripped skin off of its back and watched it squirm.

Faggot lays on the ground helpless and ball gagged while I whip the shit out of it with my belt.  I strip it down to its girly underwear while I continue to humiliate and beat it.  The faggot strips naked and squirms while I take the tazor to its fag balls.  I even took a tee ball bat and sodomized its cunt laughing my ass off.  Just a video of a faggot being totally tortured.

Put on MMA gloves and have sparing practice on its whole body leaving welts all over it.  I lifted it up by its underwear and gave it some serious wedgies.  Of course I took my tazor and zapped it a few times.  I stand on the bitch in my socks and trample the fuck out of it.

I ball gag the faggot then take a rope and tie it like a mummy while I smack it and whip it like a dog.  Tazor it a few times and make it squirm.  Show some size comparison then choke the living shit out of it while it drools and begs for mercy.

One thought on “NEW REAL TIME SLAVE DOMINATION VIDEOS MADE”