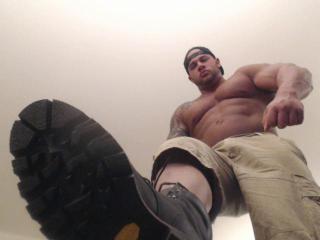 I’ve been humiliating and u$ing slaves left and right.  I own this boot fag that worships my size 14 chippewa logger boots every week.  It always tells me how it fantasizes about me totally trampling the shit out of it and being used as a footstool and doormat.  This fag just wants to be flattened like a pancake and to be stomped in its little fag dick and balls without mercy.  The slave messaged me tonight like usual begging to worship my boots and to be told how ill crush the fuck out of it.  The boot fag was in for a treat because I had my friend Diesel over my house.  I told the boot cunt my alpha bro was over with boots on and loves stomping out scrawny dip shits just as much as I do.  We both cash raped this boot cunt and showed it no fucking mercy.  The webcam was on the ground while Diesel and I took turns stomping at it telling the cunt that how we were gonna take turns crushing and trampling its whole entire body from its head all the way down to its pathetic fag balls.  I would seriously just leave the slave stripped naked in the corner of my dark basement shackled spewing blood from its mouth with boot imprints embedded in its skin not even to be able to move from all the crushed bones in its body. Once a human turned into nothing more then an object for my amusement.  I’ve also have had this other loser worship me every night because its wife is away seeing her family.  The dumb fag is just to stupid to realize shes out partying somewhere getting the shit fucked out of her by a bunch of alpha studs. When this dip shit first turned its cam on it was shirtless.  I literally couldnt stop laughing my ass off at the fag.  This loser had tits bigger then most women.  I ordered it to go get a a pair of its wifes panties and toput a bra on to cover its huge bitch tits. At first it wouldn’t put a bra on but I told it I was gonna literally turn my cam off if it didnt cover its huge boobs and nipples. This cunt drank beer after beer on cam and it seemed like it was getting fatter after every beer. Then its dumb ass pulled out its wifes huge black dildo and started gagging and choking on it like a dumb slut.  Its wife actually put a chasity on its dick before she left for the week even though its pretty obvious not a single woman would ever hook up with this loser even if he payed for it . I had the fag take the black dildo and beat its balls senseless to the point it almost puked from the pain.  Then I ordered it to stuff the dildo up its fag ass.  It moaned like a dumb whore while it bounced on it like a bitch.  The fag the pulled it out of its ass and of course the dildo was covered in fag scat.  I ordered the cunt to lick the dildo fucking clean.  At first it refused but after I yelled at it it licked the shit off the dildo like it was a lollipop. There was shit all over its face and even some stuck in its teeth.  I even got the loser to admit it was at a glory hole earlier in the evening sucking off some black dude and swallowed all of the cum.  I’m sure its wife knows its a queer so that’s why shes always out getting dick from real men. I’ve also been humiliating this other  undercover faggot. I make the loser shit its pants then sit down in it even when its roommate is in the next room.  I’ve even made the loser take a shit then shove the shit back up its ass.  I even make the fag put its fingers in its pants after it took a dump in them and make it lick its fingers clean.  I can hear it gag and almost puke as it eats it like a dog while I just laugh at how pathetic the loser is.  That’s just a few examples of the power I have over people and how I make inferiors do anything I tell them too.  $laves paying me to eat their own shit for example HAHA.  Don’t worry muscle admirers I also do muscle worship shows posing down and showing off this huge adonis body.  I was just born a top alpha male and have always gotten anything I want in life especially women and a ton of beta males that follow me and worship the ground I walk on.

$LAVE IN ITS WIFES BRA AND PANTIES

WISHING IT COULD BE A “MAN”

One thought on “JUST A FEW RECENT HUMILIATION STORIES”